An exotic and life changing experience traveling in the wondrous country of Bhutan. A perfect wellness travel getaway. 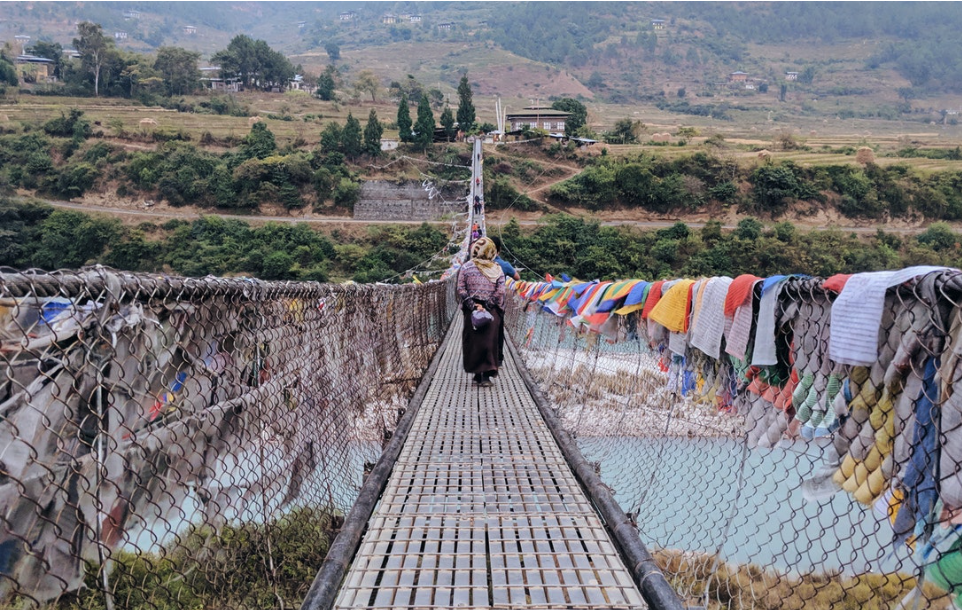 Our plane’s wingtips seem only feet away from the heavily forested mountain walls and I feel as if we’re flying in a bush plane instead of a modern 120-passenger Airbus. We descend, turn sharply into another valley and set down in a smooth landing at Paro, the country’s only airport. After nine years of dreaming about the Land of the Thunder Dragon, Druk Yul, and almost a year of preparation, we are finally in Bhutan.

Our guide greets us wearing the compulsory national attire, a knee-length wrap-around gho. He bows before each of us and drapes over our necks a white khata, the scarf used by Buddhists to denote a positive start to a relationship and indicating the giver’s good intentions. Our itinerary consists of a 10-day cultural tour to central Bhutan revolving around the annual religious festivals known as tshechus, and the 9-day Jhomolhari Trek.

Almost completely cut off from the outside world for centuries, the twin pillars of Bhutan culture are the Wangchuck monarchy and Buddhist religion. The country began to open up to the modern world in the 1960s. Radio was introduced in 1973; television and Internet arrived in 1999; the first democratic election was held in 2008. Despite the move towards modernization, it is a kingdom steeped in tradition. It is a magical land where mountains and lakes are sacred, hunting, fishing and mountain climbing are forbidden, even peasants and monks use cell phones, and the government measures Gross National Happiness instead of Gross National Product.

We travel east on Bhutan’s only lateral road, a “dancing road” notorious for its potholes, switchbacks and precipitous drop-offs. We snake our way from Paro to the Bumthang Valley, revelling in the hauntingly beautiful forests and the terraced valleys, golden with ripe rice. We pass countless chortens, small shrines built to house sacred relics. We tour the dzongs, Bhutan’s architecturally distinct fortress-monasteries that house the regional government offices and the national monk body. Within each multi-storied walled compound we explore the large courtyards, temples and beautiful galleries featuring painted, intricately hand-carved woodwork.

At the Wangdi Phodrang dzong, we arrive during the tshechu and marvel at the stamina and training required of the monks for the ancient Black Hat Dance, which lasts for hours. It describes the teaching of the Buddha and calls on deities for protection from misfortune and to drive out evil spirits. Their movements are set to the ringing of cymbals, blowing of long horns and beat of drums. The dancers whirl about the large courtyard wearing brocade robes, wide brimmed black hats and aprons with the face of a protective deity.

For Bhutanese, tshechus are an occasion for reverence and blessing, feasting and socializing. While outwardly reserved, the locals welcome us in quiet, warm ways. One woman in Tamshing invites us for butter tea in the monastery. The following day, as we walk though the Bumthang hills, another invites us for rice beer, proudly hosting us in her small farmhouse. When we visit temples, old women and men interrupt their prayers to greet us.

One day, we hike from the Sheylang La (pass) into the Ura Valley. We watch as villagers harvest the potato crop by hand and harrow the field afterwards with an oxen-drawn plow. When we visit the local boarding school, our guide tells us that in 1964 the King invited Jesuit Father William J. Mackey, originally from New Brunswick, to set up the school system on one condition – that he would not proselytize. He kept his word and built a secular education system, which is now a cornerstone of the government’s social policy. English is widely spoken and signs throughout the country are written in English and Dzongkha.

Heading back west, we are delighted by cloudless skies and expansive views of the Himalayas, stretching for what seems to be eternity. Although looking forward to our upcoming trek, we linger at passes where my spirit is swept away by the “eminently visible and audible” prayer flags flapping in the wind, sending good thoughts in all directions. The Jholomari Trek awaits.

Another Article: The art of Blissology! Check it out!

One thought on “Bhutan: Land of the Thunder Dragon”