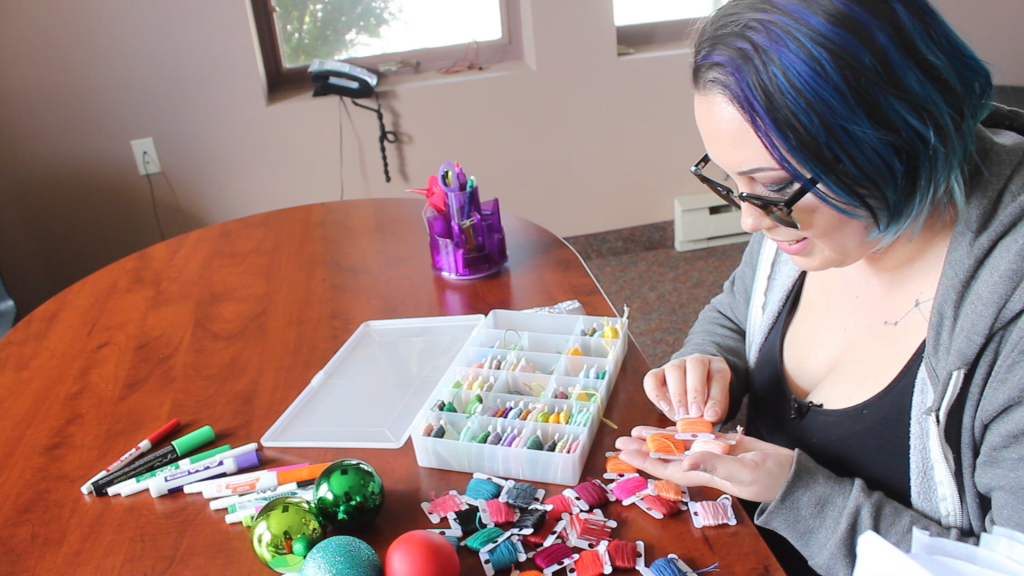 See AJ and Scott try out EnChroma eyewear on our video gallery, or view it directly on our YouTube channel.

AJ MacDonald is an interdisciplinary graphic designer based in Halifax, Nova Scotia. As a creative person, she has always loved art. She is an original. Her view of the world was always her own.

“When I was 12, we did a lot of art classes in school and I remember the teacher always complimenting my work,” she says. “But she would tell me to ‘do a better job checking my colours next time.’ I never really got it. I didn’t understand what she meant for a while.”

MacDonald suffers from red-green colour vision deficiency, which affects the associated cone cells in the eye. While more common in men because it is passed on through the X-chromosome, it can, though rarely, express in women as well.

After explaining that reds and greens tend to blend and seem “muddy” in her vision, MacDonald talked about how her colour vision deficiency impacts her everyday life. At night she is unable to drive because if she cannot see the placement of the vertical traffic lights, she cannot differentiate the colours.

“I wear a lot of black and grey clothing because it’s easier for me, rather than match other colours I can’t see,” she says. “I find a lot of the time with my artwork, I’ve depended on feedback from other people because I can’t do it by myself. I use a lot of cool tones like blues because I find I can see those colours a lot better than I can reds and greens.”

The severity of colour vision deficiency varies from person to person depending on how the cone cells are affected. For some, the deficiency can be slight enough that it’s barely noticeable, or even dismissed as poor colour perception.

In the case of Scott Jewers, an avid out-doors person and IT professional, it was not until adulthood that he discovered he had a colour vision deficiency.

“Around five years ago I did an online colour blind test with some friends and they could see the numbers and I couldn’t,” he says. “So it was pretty clear something was definitely up. I didn’t know I was colour blind. My father used to say ‘deer have a red tinge in their fur’—I have never seen it.”

Photopigments, proteins which are located in the cone cells of the eye, activate when absorbing certain wave-lengths of light that are then translated to the brain as colours. Different wave-lengths of light correspond to red, green and blue. In the most common form of color vision deficiency two of the photopigments overlap, and when the photopigments overlap, the perception of colours are altered.

The lenses developed by EnChroma, for example, remove specific wave-lengths of light where red and green photopigments tend to overlap. This helps those with red-green colour vision deficiency perceive a greater range of colour.

EnChroma’s Chief Science Officer Don McPherson explains that the lenses were originally created for use by physicians during laser eye surgery to help distinguish between tissue and blood.

“I happen to be an Ultimate Frisbee fanatic and was playing in a tournament in Santa Cruz, California,” he says. “A friend of mine borrowed my sunglasses and said, ‘Dude, I can see the colours of the cones.’ And I said, ‘what are you talking about?’ And he said, ‘I’m colour blind.’ I quickly became interested in finding out what that was.”

McPherson was surprised to find his friend had not been able to see the different shades of green in the grass. It was then that his research into designing eyewear that could assist those who are colour vision deficient began.

At the OptiMYz offices in Nova Scotia, MacDonald and Jewers were able to test how EnChroma eyewear works on their colour perception for the first time in their lives. The effect is not instantaneous, but gradually more colour begins to appear to the wearer. 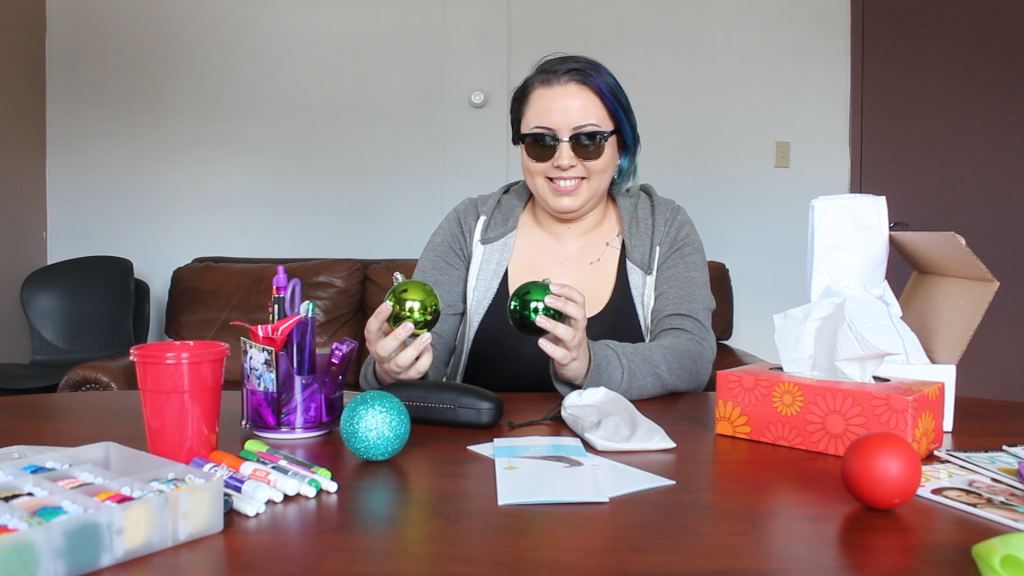 “These are two different colours,” says MacDonald in disbelief as she holds a green Christmas ornament and a red stress ball in her hands. “It’s so crazy how people would try to describe these colours and it wouldn’t really click. And this is how everyone sees colour all the time?”

MacDonald brings out her collection of embroidery floss and begins to carefully look over the different tones of red. “I didn’t even know I had bought these colours,” she says. “I’d usually bring in a pattern book and the people at the shop would pick out the colour. I wouldn’t even be able to picture what people were describing if they tried to put words to these colours.”

“It definitely seems like that cup changed colour,” says Jewers, staring at a red plastic cup nearby. “Everything’s more of a defined colour, it’s not so bright. I’m really wondering how much this has affected me in my life.”

He admits to a sense of shock at the difference in the actual colours and realizes how much he may have missed in the past. “I want to see the world though these lenses—I want to see how everything looks through this perspective,” he says. “Do deer look brown or do they look red? Now I’m really questioning it.” 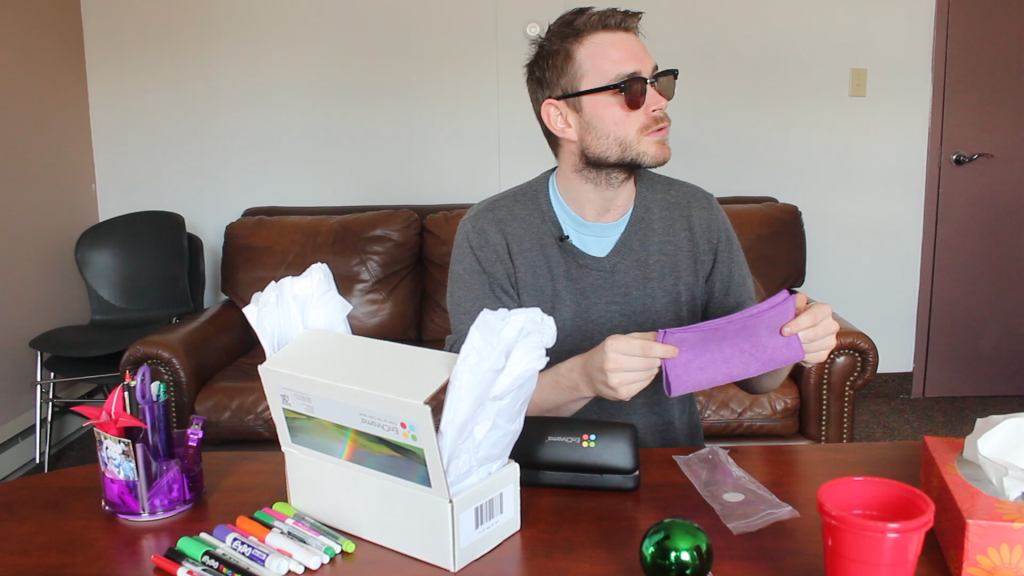 For EnChroma, stories of how their eye-wear has improved the lives of those with colour vision deficiency, such as MacDonald and Jewers, are reminders of the importance of their research.

“The real proof is the amazing amount of people whose lives have changed,” says McPherson. “We have thousands of people who have told us they can now distinguish colour. What we find is if you send the correct signal to the brain, these mechanisms that have been lying dormant for people’s entire lives start to activate.”

While the eyewear may not be an option for everyone, it allows for a brighter future for many of those affected by colour vision deficiency. There are now opportunities for them to rediscover the world with a vivid and vibrant new perspective.

See AJ and Scott try out EnChroma eyewear on our video gallery, or view it directly on our YouTube channel.