Host of The Social speaks out 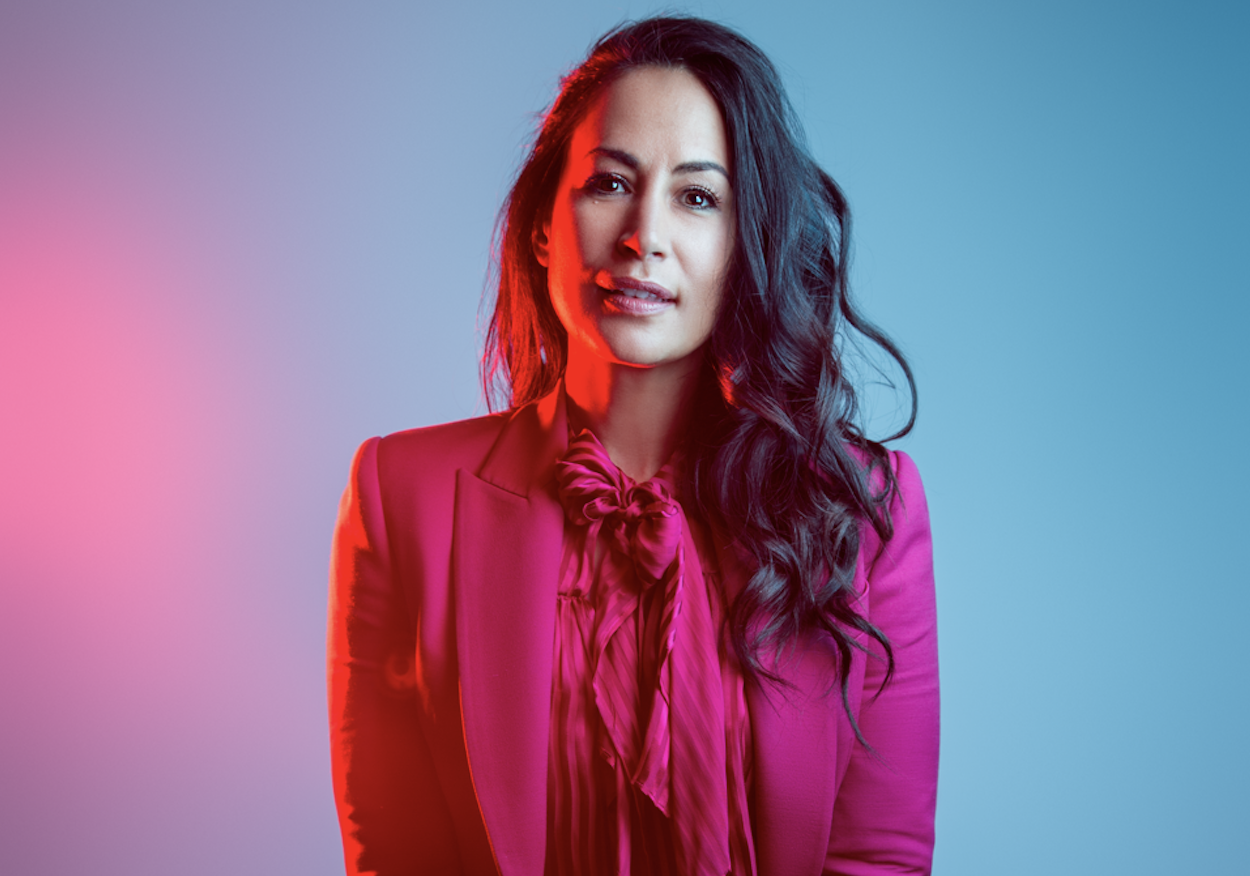 Cynthia Loyst loves her family. She co-hosts The Social on CTV. And now there’s a book. She wants women to own their pleasures from chocolate to sex. But no-one said it would be easy.

On the surface, Cynthia Loyst has it all. A co-host of the hit CTV series The Social, earlier in her career she studied radio and TV, then sex education, and produced documentaries on sex. She is beautiful, smart as hell and a natural wit. She is in love with her partner Jason and their six-year old son.

Well, yes, she does have it all. But it has not been an easy voyage. On two occasions she almost fell out of the boat.

Loyst grew up in Barrie and went to York University to study screenwriting. She took a year off to intern for Sex TV, then dropped out of school to start producing documentaries for the channel. Always comfortable working behind the scenes in small groups, she had no interest in the spotlight. Then, in the recession in 2008, she saw the TV industry get hit hard. She thought she would lose her job.

Changing careers became an act of desperation. She spoke to TV executives about doing a show. “My CTV family saw what I didn’t see it myself,” she says. “President Yvan Fescan suggested I do on-air work. Then, I had to deliver. I dove into the deep end. It was sink or swim. I had to reframe my beliefs about myself.”

For Lyost, who is not an extrovert by nature, hosting live TV was a stretch. “On TV I had to find a more amplified version of myself,” she says. “I have to be more theatrical and more amped. It was a huge adjustment.”

She did some prep to diminish her anxiety, including joining Toastmasters. The next step was improv classes in Toronto and New York.

“Improv teaches you to think on your feet and deal with life as it happens,” she says. “It was freeing— getting away from the self-critical brain that is so strong in women. It allows us to release the beliefs that we’re not smart enough, not interesting enough, not pretty enough. That well of insecurity. That we don’t deserve our success. Now companies like Google and PepsiCo’s send their execs off to do improv.”

She talks about being a highly sensitive person, an HSP, and an ambivert, a mix of introversion and extroversion. “I can read a room quickly and decide what to do on the fly. It gives you a good radar.”

The Social introduced her to many fascinating people. At first Jann Arden didn’t want to do the show. “She thought it was about big hair and tight dresses,” says Loyst. “But she did—and we discovered we were kindred spirits. I made a new friend. Ryan Reynolds was so generous. He asked me and Melissa about our kids. Rod Stewart was hilarious, a trip. Danny Devito was a spitfire, exactly what you would expect.”

She loved her job and the anxiety faded. But there was another adjustment to come. “On paper I was happy, but I was quietly suffering,” she says. “One day I wept all the way home. I knew it was not postpartum depression. The feeling was not new.”

When was the last time I did something just for me? she asked herself. She asked her friends the same question. It was not just her. She had tapped into something subtle but deep. Many women feel disconnected from their deeper selves, she realized. And they have no way to express it.

The urge to have a better life can get twisted into something unhealthy, she knew. “Weight loss culture is insidious,” she says. “Women are not supposed to take up space. We’re supposed to sublimate our desires. We are supposed to bury and pathologize them.”

Yes, there are destructive drugs like opioids and the tendency to eat too much, she says. “But we need to experience delicious things every day. The French get it. In Europe people’s lives are more integrated. In some countries, a siesta is baked into the culture.”

This awareness was the catalyst of her next project.

“I did a deep dive, writing about pleasure, building a website called Find Your Pleasure,” she says. “I decided to do things more slowly, to indulge myself by making dark chocolate truffles, by taking long naps, by having good sex. I would schedule time with my partner and even hotel nights by myself.”

She brought these changes to the show and fell into her own true voice. “I fluffed out, gained some weight,” she says. “It’s impossible to be perfect—keto this, carb that. I thought I’d call out that shit.”

On The Social and on her website, she talks about difficult subjects—masturbation, sex toys, menstruation—in a matter-of-fact way that takes out the emotional charge.

Helping women find more pleasure in their lives became her personal mission. Her expertise on sex and her natural ability to communicate became the thin edge of the wedge to help women learn to indulge themselves in a healthy, natural way. The next step is her book Find Your Pleasure, to be released in January 2020.

“When I was seven or eight I loved writing stories and I imagined one day writing a book,” she says. “I came up with this idea about two years ago. Then I met with Simon and Schuster and they liked the idea. Now it’s like launching a baby.”

Loyst was raised in a religious household where pleasure was seen as putting you on a slippery slope to ruin. “We hear ‘If you eat, you’ll get fat; if you have sex, you will be a slut,’” she says. “These are all extreme viewpoints that force women to bury their deepest instincts and desires. It does us a disservice. Pleasure is maligned in our culture. It is the dirty cousin of happiness.”

On the other hand, her family showed her what it looks like to take care of yourself. Her mother would go away for the weekend with her girlfriends while her dad stayed home to look after the kids.

She wants to start a “pleasure revolution” that will allow women to be in touch with what deeply moves them. “I want you to zoom in like a child, to take the time to notice your desires, and then to zoom out to look for the bigger pleasures.”

No matter how career-oriented they may seem, she sees women still in traditional roles as mothers and caregiver—always looking out for the needs of others, and at the same time striving for goals that may not be their own.

She learned a lot from her friend the musician Jann Arden, a non-conformist who has long charted her own way. “We need to reprioritize ourselves,” she says. “It takes courage to set your own goals—to carve out an unpopular path choosing not to strive to climb the corporate ladder, or just to live in the country.”

Adriana Huffington is another role model. She started her wellness company Thrive Global after she passed out at work one day because she was overwhelmed.

“Downtime is so important,” says Loyst. “In North America we have a rat race that is detrimental to our mental and physical health. Benjamin Franklin would start the day by walking outside and asking, what good will I do today? Then he would sit and contemplate before starting his day.”

Having a child has brought her back to elemental pleasures. Her son loves Lego. “When I’m playing with him I’m forced to be creative, to tap back into that,” she says. “The beauty of having kids is you get to play.”

In her book she mentions Krista Kent, who teaches art. “She came up with the term ‘plorking,’ a combination of play and working. That is essential in a creative job.”

Loyst was raised in a Catholic household. “My parents still haven’t given me ‘the talk,’” she says. “When I was 16 my older sister got pregnant. That’s what happens when you don’t talk about sex.”

The event was a turning point in her life. She wanted to be “that friend” for her sister, who became a single mother at 19. She went on to get a degree and is now a successful graphic designer. “There were many barriers but she always had the support of our family and a lot of tenacity.”

She asked herself: Are we striving for normalcy in our personal places? “This destroys the natural questions and answers about what gives you pleasure—about how to communicate with your partner and yourself.”

The #MeToo movement is a step in the right direction, but we still have a long way to go, she says. It can only be a good thing to talk about sex. “Asking, ‘can I touch you here?’ won’t ruin sex with your partner. It’s sexy to communicate, to be in touch with your desires.”

There is an “orgasm gap” between the sexes, she says. “Young women learn to put their own pleasure on the back burner when servicing their male partners. Sex education is mostly an anatomy lesson about the penis and the vagina. But the clitoris is the only organ that functions exclusively for pleasure.”

Menstruation is another taboo. “Lainey talked about her period on The Social. When Chelsea Clinton was on I had my period. We talked about that. Shows like The Social are working to normalize these conversations. It would’ve been great for me at age 12. I was mortified when I first got my period.”

The abuse of women happens in all sectors where power dynamics are in play, she says. “This is the gift of the #MeToo movement. There is power in numbers. In the past, women’s stories were not believed and they were silenced. Now we need to own our own pleasure and our own voices. We need to be able to say, ‘a little to the left’— or, ‘please stop.’”

Later in her career she was studying sex education at the University of Michigan and watched on TV while Trump won the presidency. She was sitting with Republicans and Democrats, gays and straights, atheists and religious people. Some had voted for Trump.

“Things he says, the sexual allegations, are shocking,” she says. “His supporters don’t seem to care. This is a strange time. We had some hard conversations. I was hopeful at that moment that our society can come together as a group.”

It’s a sign of the times. One moment society seems to be racing ahead, the next it’s lurching back. In her own world, Loyst is moving forward.

Launching her book Find Your Pleasure in January 2020 is a career milestone. It is a natural for a great communicator with so much to say. Still, writing is its own special discipline. “The publishing teams at Simon & Schuster have been amazing,” she says. “I get the best kind of editing. They show me how to improve the book and I do the work myself.”

That’s Loyst, always pushing her own limits. To viewers and readers, her success may look fluid, natural. But that’s only a partial view. She is creating her own life and career at a time when women are re-inventing their traditional roles. Success is out there. In the bedroom, at home, in the competitive world of work. But no-one said it would be easy.

Author: David Holt is Associate Publisher and managing editor of Optimyz Magazine. An avid outdoorsman he can often be found in his kayak on a lake in Nova Scotia.

How to green your cleaning routine

How to tweak your lifestyle