Smother it in sauce! 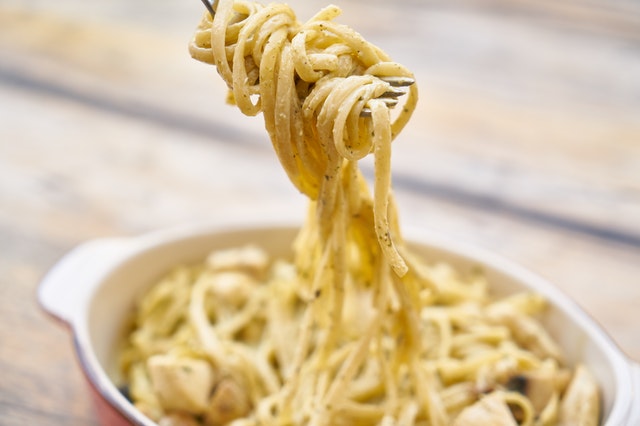 Everyone has gotta have a good go-to bolognese recipe in their back pocket, and this is mine. A classic ragu bolognese is not a super tomatoey- saucy sauce, as it’s made with ground meat and its juices. I used mushrooms because they’re superior to meat and just as juicy! Sure, there’s usually red wine in the base of the bolognese, but I made the executive decision to not do that—you can also tweak this to your liking. It’s also traditional to use a flat pasta like pappardelle or tagliatelle, and you want to kiss and coat the noodles, not drown them in sauce!

In a large food processor, add the onion, carrot, and celery. Pulse blend until finely minced and set aside in a bowl. You should have 2 to 21⁄4 cups of this mixture.

Add the mushrooms and zucchini to the processor bowl. Pulse blend until finely minced and nearly a puree, then set aside in another bowl. You should have 4 to 41⁄2 cups of this mixture.

In a large cast-iron pan or Dutch oven over medium heat, add the olive oil and the onion, carrot, and celery mixture. Sauté for about 5 minutes, until shrunk to about half. Add the garlic and sea salt and cook for another minute. Add the mushroom and zucchini mixture and cook for 15 to 18 minutes, stirring occasionally, until it looks more brown than green or gray and most of the water has been cooked out and you really can’t distinguish the vegetables.

Add the tomato paste and bouillon base and cook for 3 to 5 more minutes, until it starts to caramelize. If you wanted to add in a splash of red wine, here’s where you would do it and just cook a little longer.

Add the soy or cashew milk and balsamic vinegar and deglaze the
pan, scraping up any brown bits at the bottom. Turn the heat down to low and simmer for another 10 minutes or so while your pasta cooks.

Meanwhile, bring a large pot of salted water to a boil and cook the pasta to al dente. Reserve 1 cup of the pasta cooking water and add it along with the vegan butter and 1⁄2 cup of the shredded vegan Parmesan to the sauce mixture. Stir to combine until the cheese is mostly melted, about 2 minutes, and then use tongs to add the cooked pasta right into the pot of sauce. Use the tongs to coat the pasta properly, 1 to 2 minutes, until heated through and all the Parmesan is melted.

Serve the bolognese topped with the remaining vegan Parmesan, black pepper, and parsley.

You can substitute 1 tablespoon of vegan Worcestershire for the vegan beef-flavoured or mushroom bouillon base.

Author: Lauren Toyota is an award winning and inspiring Canadian vegan chef. We also feature her recipes on Optimyz and in both our print magazines; Silver and Optimyz.