Relax and enjoy the goats! 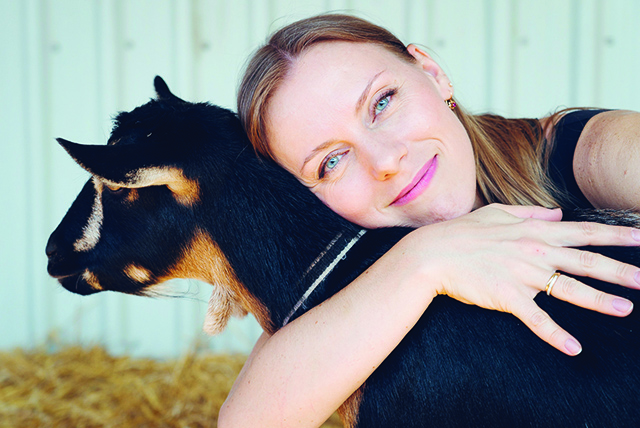 Goat yoga has people herding (so to speak) to Niagara-on-the-lake.

It started as a pretty straight-forward idea.

Melina Morsch was looking to create an extra special experience for people. She had a thriving yoga studio; her friend had a rural barn with several goats. Yoga. Goats. What more could you need? It might just be a match made in spiritual heaven.

“I figured let’s give it a shot,” explains Morsch. “Let’s have a yoga session in the barn and have the goats just run everywhere.”

She posted about it on social media and in minutes, the class was full. That was followed by a bombardment of people pleading for another session. She took goat yoga on the road, putting on sessions for university students, corporate events and even bachelorette parties. Before she knew it, she was under the hot lights on the set of CBC’s Dragons’ Den asking for help building her surprising yet thriving new business—Fox Den Yoga.

“After Dragons’ Den, the business just exploded. It took me a while to figure out what it all meant,” said Morsch. “At that point, we were just doing yoga class and the goats sort of just did their thing. I didn’t pay attention to the connection between animal therapy and physical movement.”

It’s no secret that the therapeutic characteristics of animals is backed by solid science. When we interact with animals, dopamine is released by the brain’s pleasure centre as well as oxytocin, affectionately known as the “cuddle hormone.” Studies show that this combination lowers people’s stress level; it takes us back to a more grounded, simpler time in our minds.

“I started teaching the class based on that knowledge. I really wanted to let that come through and let people be still, present and in the moment.”

But here’s where it gets really cool.

Morsch’s goats are called Nigerian Wolf Goats. Originating in Africa, these cuddly little beasts are very low on the prey scale, thanks chiefly to their lack of top teeth, poor hearing and eyesight and inability to move quickly. Simply put—these guys are sitting ducks in the wild.

Because they have no real defence mechanisms, they have developed a well-honed “herding instinct.” They link up with larger animals like zebras or giraffes and sync up their breath and heart rate with them. This allows them to feel energetically if there is any anxiety at all in the group. They can pick up on danger and ditch the watering hole before anything goes down totally based on their ability to pick up on the anxiety level of the herd.

“They do the same thing in the yoga practice. As we sort of ignore them, and start breathing and moving together, they think we’re the new herd and they’ll sync up their breathing and heart rates with everybody in the yoga class,” explains Morsch. “They echo back the energy of the yoga class. So, if we’re vigorous and animated, they’re vigorous and animated. When we get into Savasana and we’re quieter and more meditative, they’ll come and lay-down on the mats because that’s what they think the herd is doing.”

For their survival, they have to keep their energy the same as the group, so they can feel if there’s a difference because they have to sense if a predator is coming.

This connection is a powerful one for the group.

“As a group, we all have this moment of feeling connected and present and joyful. People leave with the biggest smile on their faces and they come back over and over again.”

Morsch says that this season has been even more special because of the challenges everyone has faced by the COVID-19 pandemic. With everyone feeling disconnected and isolated, anxiety is running high, and being still and breathing together—people and goats—has resonated more this year than ever. It seems to be just the right medicine for the moment.

“I feel like I’m doing God’s work with this program. When I see people that haven’t had that moment in so long—just feeling authentic, childhood joy—their whole face lights up.”

And the goats? They love it too.

“Their job is to just allow people to relax around them, so they’re treated like little kings and queens!”

You might also enjoy this article on staying fit while expecting.

Author: Julie Lawrence is a communications specialist and journalist from Halifax, Nova Scotia. She is a contributing editor for HUM@Nmedia – Canada’s largest health and wellness media company.

Tap into your sexual fantasies

Julie Lawrence is the assistant editor for HUM@Nmedia, thee parent brand for Optimyz and Silver Magazines. She is a graduate of the King's School of Journalism and holds a degree in public relations from Mount Saint Vincent University.

Stretches for working at home

Exercise your smile and look younger