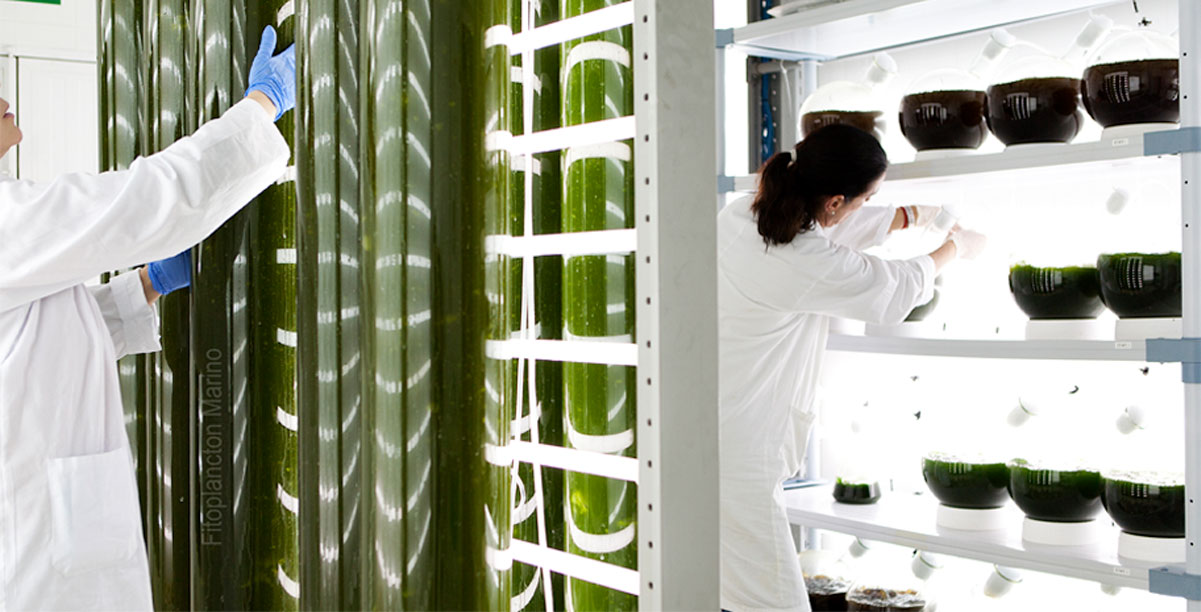 The present state of the climate was predicted more than 100 years ago: record heat waves, fires, melting glaciers and ice caps, disappearing forests and warming oceans, all taking a toll on the flora and fauna of the planet.

Dave Hunter, CEO and founder of Blugenics Innovations Ltd., knows the story: local weather that reflects long-term climate change caused by energy- and resource-hungry humans burning fossil fuels and simultaneously, in a double whammy, removing the trees and other plant life that absorbs the carbon from greenhouse gases like C02.

Hunter has been following this trend closely for years, because, ironically, it is one of the foundations of Blugenics Innovations, the company that creates a nutrient-rich food from phytoplankton, the microscopic plants found near the surface of the lakes and oceans of the world.

Phytoplankton obtain their energy from the sun through photosynthesis, as do trees and other land plants. At the base of the marine and freshwater food webs, phytoplankton account for about half of global photosynthesis and at least half of the oxygen production, despite amounting to only about 1% of the global plant biomass.

“The future of the planet is bright,” says Hunter. “We are futuristic farmers growing vitamins, protein, antioxidants, and oxygen. Our product goes from sea to stomach — we grow the product with minimal impact on the ecosystem. We are a phytoplankton company, not a supplement company.”

He explains that Blugenics takes in pristine ocean water off the coast of Spain, adds the phytoplankton and moves it through a thin tube in a temperature-controlled tank just 150 metres from the ocean. Later, the pure ocean water, now with phytoplankton added, is returned to the sea.

This basic foundational nutrition is missing from many modern diets, where the foods lack nutrients because they come from depleted, fertilizer-dependent soils. All this is exacerbated by daily stress and other factors that impair digestion and impair the flora that make up the microbiome in the human gut.

Hunter was introduced to phytoplankton in British Columbia, where the original work was done by Tom Harper who was using about 200 strains.

“We needed a consistent product — like a strain of tomatoes,” says Hunter. Blugenics settled on nannochloropsis gaditana Lubian, a holistic subspecies that was identified in 1997 off the coast of Spain by Professor Carlos Lubian.

Lubian was the mentor of Carlos Unamunzaga, General Manager of Spanish company Fitoplancton Marino, S.L. Hunter, in turn, considers Unamunzaga his own mentor.

“The native strain of phytoplankton is an ancient original heirloom seed plant,” says Hunter. “It grows so fast in three months, it’s thick like vibrant green ketchup. Each tiny plant looks like a green globe. “It swims and has an intelligence. It is dead, but alive.”

Monitored for safety and lack of contamination, the plankton becomes a freeze- dried extract that has only 2% moisture. “It is like a pancake which we break and then put into a grinder to create the powder.”

The brand-name product is known as Karen Phytopankton, named after Hunter’s late mother. It is consumed as powder or in tablet form. There are 67 billion plants in one tablet, which is the optimal dose per day for most people.

The first Blugenics product dates back to 2006. The company moved from BC to Sackville, New Brunswick in 2008. As it added research and upgraded manufacturing and marketing, Hunter sold hotdogs and opened a restaurant to help pay the bills.

Then the company needed to apply for an NPN number for its Canadian market, which entailed expensive research to show its safety and efficacy. In 2015 they received the first license for Karen Phytoplankton.

Now Karen Phytoplankton sells online and through retailers like Lawtons-Sobeys, Shoppers Drug Mart, and Rexall. Costco called in 2018 and it took two years to on-board partly because of Covid. The website has also gone through multiple upgrades.

In the last few years, Blugenics added Ageless, a beauty product. It contains antioxidants, plus B12. Natural and plant based, Karen® Ageless contains the antioxidant superoxide dismutase (SOD), which helps protect against the damage caused by free radical activity and oxidative stress—two major factors in the aging process.

Karen® Phytoplankton offers traceability from the raw materials used to the end product. The company created a quality and safety system based on ISO 22000.

Blugenics obtained authorization from Novel Food for Marine Microalgae in Europe, as well as a Generally Recognized as Safe rating in the United States and Canada.

Today Karen® Phytoplankton is used regularly by many thousands of consumers, from elite athletes to regular people who have experienced improved health and wellbeing.

Besides their own health, they are supporting a healthy planet and not detracting from it. This is an approach that more companies need to adopt if we are to reduce our impact on the planet that humans – and millions of species of animals and plants, including tiny phytoplankton – call home.

‘When I was younger I was overweight and stress made me addicted to carbs. I went on keto for four months and brought my weight down. Today at age 48. I have good energy. I am not on any prescription drugs. I rarely get sick and if I do I recover quickly. My blood pressure is normal. I have no skin problems and my cholesterol is normal.’ – David Hunter