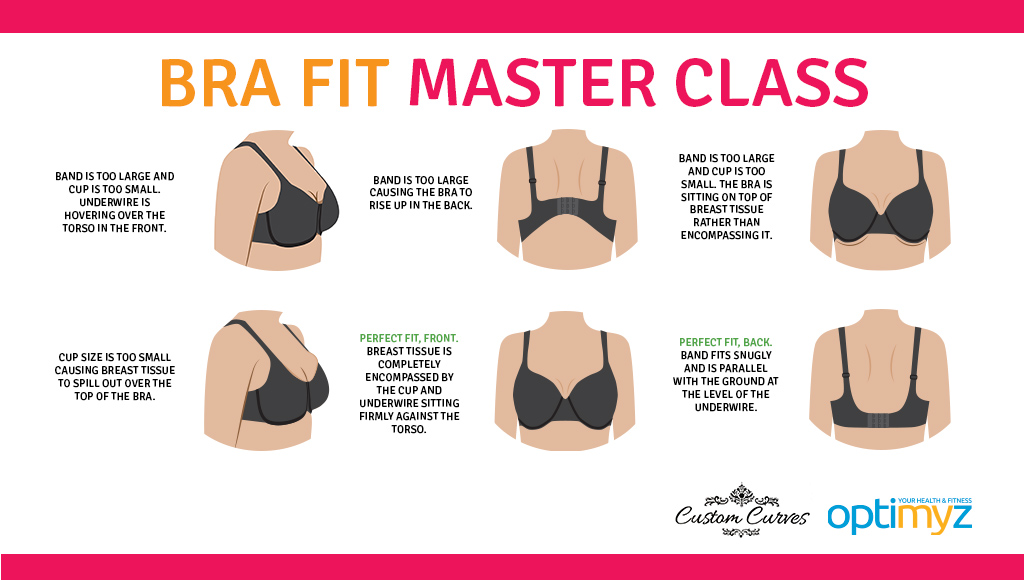 Dorothy Yang has been in the clothing game for a while. She has a BFA from the Nova Scotia Centre for Art and Design, a diploma in costume studies and a year in the fashion program at Ryerson University under her belt. Today, her specialty is women’s lingerie. Her store Custom Curves specializes in the D+ cup.

Bras used to come in four sizes: Small, medium, large and extra large, which became A, B, C and D. Many mass-market lingerie stores measure the band size above your chest, or arbitrarily add four inches to the true band measurement.

The support of a bra comes from the band. If it is too loose, the bra rides up in the back, which actually drives the underwire upwards into your underarms as your bust pulls the front of the bra down. Inaccurate band sizing causes 90% of fitting issues Yang encounters.

There is a proportional relationship between band and cup size. As the band size increases, so does the cup volume. This is why you might be sized in a larger band if a shop does not carry larger cup sizes. However, the volume increases only because the cup gets proportionally wider to accommodate the frame of the wearer, not deeper.

“So what happens is the band becomes part of the cup,” explains Yang. “The bra gets pushed farther and farther away from your body if you size up too much in the band.” This causes gaping where the wires should be snug against the body.

Why is bra fit such an issue? Mass-market lingerie stores maximize profit by offering more styles in a limited supply of sizing options. Higher product turnover means higher profitability. They only carry between 25 to 35 bra sizes, while Yang carries over 95.

Also, because most stores max out at a DD, the public perceives DD as the maximum cup size. “People who come in and notice that I am a D+ store, automatically say, ‘You’ve got nothing for me here because I am definitely not a D,'” says Yang.

And those who believe themselves to be a DD almost always end up in a FF size. “A lot of people who started out in a 34A/36B, they’ve all been sized in a D+ cup with a true band measurement.”

It’s just plain false that everyone can fit into the paltry selection available. Does it matter? An ill-fitting bra means straps fall down easily, with endless swooping and constant readjustment. It can also lead to heat rash under the breasts, back and neck pain and low confidence. Bras are highly engineered garments: “Someone who wears a 34H is not going to have the same concerns as someone who wears a 36B,” Yang says. “The bra has to be constructed differently.”

Though a bra is a support garment it shouldn’t be uncomfortable. If the bra fits, the wire will be right up under the root of the breast, touching the chest wall at the front. It will feel like it’s encompassing all the tissue. And the band should be tight enough that it stays parallel to the floor, level with the underwire.

Yang may be a fit critic, but she’s not out to push her beliefs on anyone. She is happy to accommodate with a slightly larger band for comfort’s sake.

Find Dorothy on Facebook at Custom Curves or at 135 Portland St, Dartmouth, NS. Share your bra-fitting woes with our community on social media using #MYBraWoes.