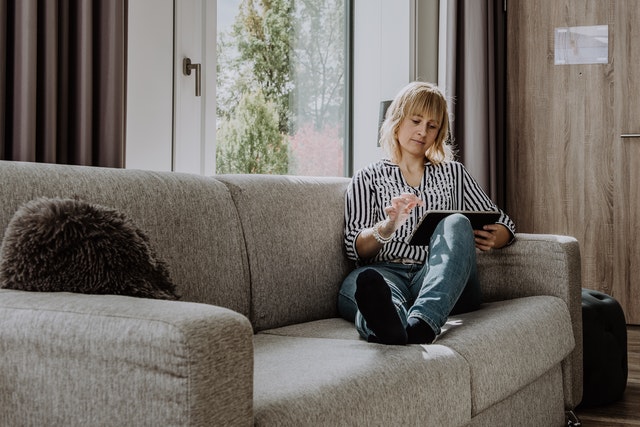 Every woman will go through it, so let’s start talking about it.

In my house, menopause is not a taboo subject. I talk about it openly with my husband, two daughters and son, and I want them to do the same with me. After all, they are all here with me as I am transitioning into my third act of life. It really is a family experience.

For the most part, the only people who talk about menopause are women near or in middle age. However, the more we discuss this change of life, the less mysterious and shameful it will become.

Sure, there will be some discomfort and embarrassment around “the talk,” just like there is around the puberty talk. Yet about half of the world’s population enters this natural stage of life, so it seems a bit odd that we have reached a point after many millennia where menopause is still considered taboo.

But not for much longer.

Western society has mostly eliminated the taboo around sex, low testosterone, and hemorrhoids. So why is menopause, alongside mental illness, still discussed in back rooms and in secrecy?

The first recorded reference to menopause came from the Greek philosopher Aristotle. Little else was said about it until the late 11th century when a female medic named Trotula de Ruggiero wrote about the topic. Discussion, however, was only in whispers and in secret.

It wasn’t until 1821 that the term “menopause” (Greek pausis [pause] and mēn [month]) was used. Dr. Charles Negrier, a French physician, announced that women’s symptoms of hot flashes, irregular periods, and depression were related to problems with the womb or uterus.

In fact, it was thought the uterus traveled through the body and eventually strangled women and caused hysteria and disease (the Greek word hysterus means womb, hence the association). It was believed hysteria showed up as insomnia, irritability, nervousness, and other menopausal symptoms.

By the late 1920s, doctors began to recognize the relationship between menopause and hormones. This led to the first commercial hormone treatment for menopausal symptoms in 1942: Premarin, which was made from extraction from pregnant horses’ urine. It was the only game in town until more than two decades later, when pharmaceutical companies began to develop hormone replacement therapy, or HRT.

The problem is that menopause was portrayed as an estrogen deficiency disease. This concept was put forth by gynecologist Robert Wilson, who wrote Feminine Forever. Although the perspective wasn’t positive, menopause got press.

Since then, the public view of menopause has improved. The first International Congress on Menopause appeared in 1976. As more women became involved in science, politics, and business, they proved they could tackle whatever life threw them, regardless of their menopausal status.

Yet the stigma remains.

In a survey by Hult Research of more than 5,000 employees entitled “Speaking Truth to Power at Work,” the most common fear expressed was that speaking up truthfully about menopausal symptoms could be perceived negatively. This seems to be especially true when the women’s manager is young and male. Women are afraid managers who think this way may have a negative effect on their ability to perform well.

Growing up, I remember my mother talking about having hot flashes and how debilitating they were. Her hot flashes lasted for many years, even after she had a hysterectomy at the age of 49. I remember that surgery well, not because I understood why she had it, but because it took her what seemed like months to recover from it. My mother never shared exactly what she was going through—and why—and to be honest, I never asked.

But as I got older and started on my own perimenopausal journey, only then did I truly understand the depth of her surgery. I started to understand (and empathize with) her silent suffering.

I started going through menopause a few years after I had my third and last child at 41. I started to gain and lose weight overnight, had irregular periods, and became much less patient than normal. I didn’t pay much attention to why it was happening because I didn’t correlate the signs and symptoms to anything other than a stressful, busy life—which in hindsight probably wasn’t the best way to handle them.

Two months after I turned 47, my hot flashes came on with a vengeance. Day after day I would have no relief from the intense burning heat then freezing cold cyclical feelings. One minute I’d be stripping off my clothes, and the next minute I’d be wearing my winter jacket. It was an unbearable way to live. One day, after an intense day of hot flashing, I broke down and I told my husband I need to figure out a solution ASAP not only for me, but also for all women going through what I was experiencing.

That was the push I needed to research and learn everything I possibly could about perimenopause and menopause.

As a Holistic Nutritionist, I am very familiar with the benefits nutrition, exercise and how what we put in-and-on our bodies affect us. But menopause…well that takes everything to an entirely new level. Foods and beverages, I once loved, unfortunately no longer love me back. Wine? Nope. Chocolate? Caffeine? Both in moderation (a lengthy hot flash will notify me when I have had too much of either). Even my fashion sense has changed. I had to break up with sweaters and thick sweatshirts and instead opt for tank tops and t-shirts for my daily uniform.

But I don’t look at any of it as negative. In fact, I find this time in my life to be empowering. I no longer do things I don’t want to and I have learned to say no. A lot. I spend time with people I love and have let go of those who no longer serve me (or my family). As our estrogen and progesterone levels plummet, my self-confidence and self-love has skyrocketed—something that took me 50 years to accomplish.

While baby boomers as well as GenXers are breaking the silence and exposing the myth that menopause is a disease, and educating themselves, my homework for you is to talk to your family and friends (female and male) about this life change and portray it for the natural progression that it is. It’s an opportunity to learn and grow, and a chance to share your experience with others.

As I continue to navigate this next chapter of my life, I’m doing the same, while also learning to take life in stride, taking more deep breaths, and reminding myself that the older I get, means the more I have experienced, which in turn means the more I have to offer others. I believe women in menopause are like butterflies. First, we undergo metamorphosis, then we take flight to become our true, authentic selves.

Are you ready to help break the menopausal taboo?

You might also enjoy this article on how the pandemic turned many of us into a bing eater.

Author: Andrea Donsky, RHNis a pioneer and visionary in the Natural Health Industry. She has combined her expertise as a Nutritionist and an Entrepreneur to educate the public on living a naturally healthy lifestyle. Andrea inspires people to make healthier choices through her businesses, media appearances, podcast, books, articles, videos, and speaking engagements. She is a contributor to Optimyz & Silver Magazines and on Optimyz’ Top 100 Health Leaders in Canada list. You can find her here.

How to choose the right bike

Her expertise as a Nutritionist and an Entrepreneur to educate the public on living a naturally healthy lifestyle. Andrea inspires people to make healthier choices through her businesses, media appearances, podcast, books, articles, videos, and speaking engagements.

What are clean cosmetics?

Postbiotics: What you need to know

What to expect during and after a miscarriage