Archery is a growing sport for women and requires a lot more effort than you might think! 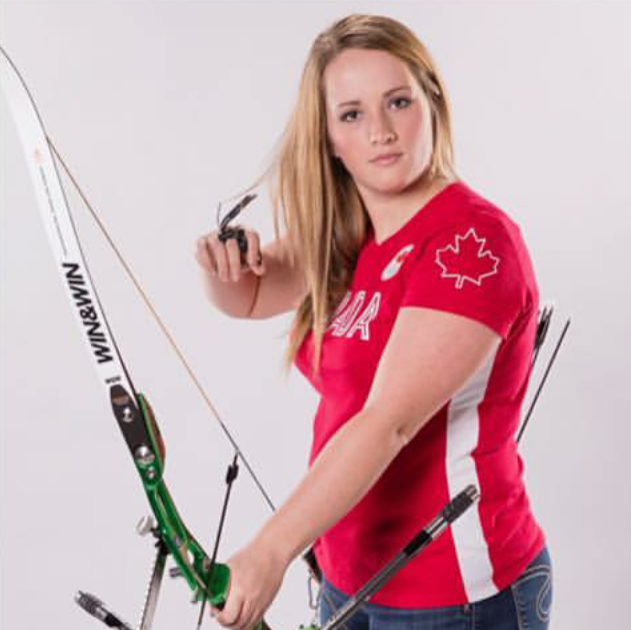 Archery isn’t a sport we tend to hear much about. It seems to be a thing of movies and times long ago, or Katniss Everdeen in the Hunger Games trilogy. But archery is an Olympic sport with a long history. It is a sport that may seem simple, yet it brings together the need for core body strength to manage standing for extended periods and being steady in high winds. Mental agility for aiming. Upper body strength is needed too for pulling the bow string and keeping the bow steady as you aim.

Archery is seeing a revival lately and women are playing an active role. We wanted to learn a bit more about what it takes, so who better to talk with than Canadian women’s Olympic archer, Georcy Thiffeault Picard of Quebec.

Picard didn’t come to archery by picking up a bow as a child and deciding she wanted to be in the Olympics. First she started with swimming, but as she says “…I told my mom it left my hair all messy and gross.” Then, she attended the Sport Montreal Camp, which gave her an opportunity to try other sports. Weightlifting and fencing were interesting, but it was archery that intrigued her the most. She could shoot all year round. In the summers she says, she could shoot water guns at her brothers, but not in the bitter cold Quebec winters!

In the summer of 2000 she asked her parents if she could take archery in September. Her father at first thought it was a sport for men. But her mother decided to give her a chance and even tried a little motivation; if she hit the yellow ring, a “9” (on the target), her mother would give her $1 and if she hit the gold in the centre, the “10,” she’d get $2. By that November, she’d bought her first bow and was shooting once per week. She says her mother begged her to stop shooting for the money and just shoot for fun. And sure enough, as Picard shot more and more arrows, her passion for archery grew. She had found her sport.

In 2004, she saw the Olympics for the first time on television. That was a seminal moment, when she knew she wanted to be an Olympic archer. She would watch the Olympics from then on, to help keep her eye on the goal. Eight years later in 2012, she was at the nationals in Victoria, British Columbia and the opening ceremonies were on, but she was terribly sick. But she stayed up and competed the next day! When she saw that Brazil was the next summer Olympics, her mind was made up. She was going. And she did.

Today, there are three kinds of bows; recurve, longbow and compound. The most ancient is the longbow, which is usually one piece and very long as the name implies. They also require the most strength to pull. Recurve bows are usually what are called “take-down” bows where the limbs attach to the handle and when not strung, curve outwards, away from the body. Compound bows use a series of pullies, which make drawing easier after a certain point and provide more force to the arrow. Compound bows are mostly used for hunting and are not used in the Olympics. Traditional archery is using a longbow or recurve bow. Prices can range from $200 for a very basic model to $5,000 for the top end.

As for Picard, she’ll tell you that like any Olympic sport, it’s not easy. When she was getting ready for the Olympics, some days she would shoot between 250-300 arrows. She spent a lot of time on rowing machines to build core and upper body strength. And just as important she says, is the mental game of archery. As Picard says, “Your mind has to be thinking about only one thing called ‘rhythm and timing’ also called most commonly ‘the zone’ and its very hard to accomplish when your mind is wandering here and there.”

While Picard officially retired from Olympic archery this year, she believes that Canada stands a good chance in 2020. Archery Canada has developed some excellent programs and her bets are on Virginie Chénier, also from Quebec as the one to watch for in 2020. Beyond the sport of archery, Picard says it’s a great opportunity to meet people and socialize.

There are archery clubs across Canada with indoor and outdoor ranges. Of increasing popularity is 3D archery, which involves moving through an outdoor course and shooting at large plastic versions of bears, deer and other animals. You can learn more at the Archery Canada website, which organizes events and the Canadian Olympic team qualifying.

Author: Giles Crouch, a member of the Optimyz team and digital anthropologist who has an interest in archery. He shoots a take-down recurve bow for target archery.

Also, check out this article on recovery from exercise for your muscles!