Our interview with Jann Arden 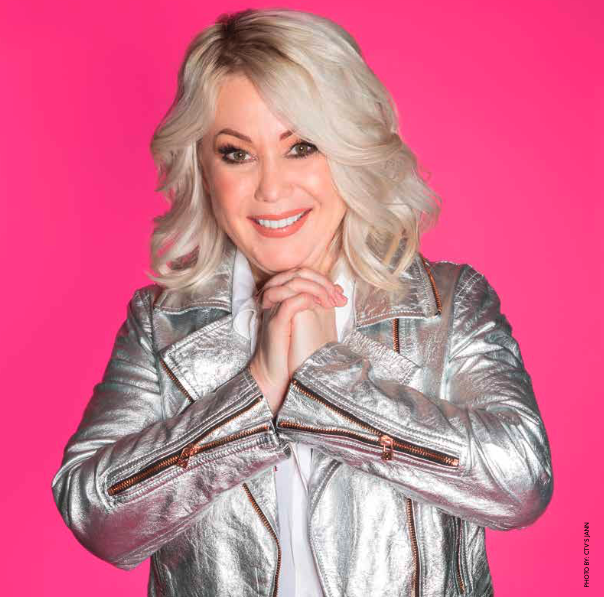 What’s good, what’s bad? Sometimes it’s hard to tell. Jann Arden knows this. Both her parents were musical. When she was young, her mother used to sing her to sleep. When she was older, they would sit at the old family piano together, the one that had escaped the loss of her grandparents’ farm to a bad hand at a poker game.

Growing up wasn’t easy. “My dad was an angry alcoholic,” says Arden. As a 10-year-old, she escaped to the basement after school, listening to records and learning to play her mother’s old Horner guitar. In a matter of weeks she was writing songs.

“By the time I was 16, I’d written hundreds of songs,” she says. “Most were terrible. But good things can come out of bad things. Dad’s drinking helped launch my songwriting.”

At her home near Calgary, Arden just returned from Europe. She is on the road more than 200 days a year, because, as she says, “people won’t come to hear me sing in my backyard.”

Arden is hard to define. A singer-songwriter, she is also a broadcaster, actor, author and social media star. She has a new show on CTV, Jann, loosely based on her life. Like the lead actress herself, the show is complex, intense, funny.

Creative people like Arden are compelled to do new stuff, because, among other things, repetition gets boring. Yet it’s rarely an easy path. We are social creatures and pushing the envelope makes us susceptible to the judgement of others, as well as ourselves. Still, the struggle can add fuel to the fire.

When Arden was young, she would copy the musical styles of singers she admired, like Olivia Newton-John and Bette Midler. “But in my songwriting I had no one to follow,” she says. “It was a comedy of errors.”

Growing up, Arden was secretive about her music. Then, in grade 12, she sang one of her own songs at her high school grad. “My mother cried all the way through because she didn’t know about this part of me,” she says. “She realized I kept things from her.”

Despite the stress at home, both her parents were funny, although not always intentionally, she says. In school, she was part of the crowd of funny kids who “tried to be jackasses.” On stage, her sense of humour became a tool. “Making people laugh is a great way to balance the sometimes somber nature of my music,” she says. “It lets people off the hook, too.”

DEATH IN THE FAMILY

Perhaps it was her difficult past that made Arden drop her original last name. She was Jann Arden Anne Richards. Her father Derrel Richards, who suffered from dementia, died in 2015. Her mother Joan Richards died of Alzheimer’s in December, 2018. Her brother Duray Richards was convicted of murder in BC in the 1990’s and remains in jail. He stands by his innocence.

Arden cared for both her parents at the end of their lives. “Looking after them brought out the best and the worst in me,” she says. “You don’t tend to think about it, but when your parents get to a certain age, health will be an issue. Memory diseases are beyond frustrating. They steal your identity. Although Ma always knew who I was.”

Arden spoke openly about her experience, attracting millions of followers on social media who were interested in her story. In 2017, she published Feeding my Mother, about her experience as a caregiver. As the Canadian population ages, these types of conversations need to happen, she says.

“I’m surprised people think I’m so honest,” she says. “I just deal with life as it is. My parents were both very practical, not sentimental—we were taught to make the best of things. It’s easy to talk about this now, although I was ashamed before.”

Arden has also never hidden her bisexuality. She has had relationships with both sexes since she was a teenager, a fact of life that both parents always accepted.

Still, life at home was rough. Her mother had tried to balance her father, who was always angry. “I never really knew him,” she says. “Later when he was sober, he realized he had not been a good parent. My mother stayed with him because she didn’t want us to change schools. She sacrificed herself for us.”

Again, it’s hard to tell what’s good and what’s bad. “When I was younger I was angry and frustrated,” she says. “Now I think those challenges made me a better version of myself.”

ON THE ROAD AGAIN

In her public life, Arden has met a lot of famous folks, musicians, actors, entertainers. Many are narcissistic and selfish, she says, especially the young ones who are thrown into the spotlight.

“They are not good people—although there are exceptions,” she says. “I think entertainers who have long careers eventually come out better people. I’m thinking of Rod Stewart, Bette Midler and Mick Jagger. At first they might’ve had a sense of entitlement, but they become kinder, more philanthropic.”

She especially admires Olivia Newton-John, who is fighting cancer for the third time. “She’s a beautiful person, very kind.” Arden has always admired Rick Mercer. “He’s funny and smart and talented. Alan Doyle is another person who has been very helpful to me.”

Musically, she has been influenced by many sources. “I go back to the old stuff like James Taylor and I listen to the new stuff on iTunes. When I was in Iceland, I was following Icelandic folk music.”

We are still indebted to the musical Renaissance in the 18th century, she says. Mozart wrote symphonies at age seven or eight. “Where did this come from? We don’t write like that anymore. It’s even amazing how they learned to write down music.”

Life is made of thousands of insignificant events. I didn’t have any big breaks.

Now we live in an age of great technology, she says. “But 500 years from now they will look back on us as very naïve. They will be dumbfounded to see what we did to the oceans and the atmosphere. It’s hard to watch.” Our society has to find balance, she says. We will get there. “I think young people today are more aware of what they have.”

Want the full story? Subscribe today here! You can get 2 subscriptions for the price of 1 at just $29.99

The music business, and life in general, can be stacked against women, she says. “Women take on extra burdens,” she says. “I think women can become tired with all the responsibilities.”

For her part, she doesn’t think she became a mature person until she was in her 40’s. Today, she knows what she wants. “Now, I think, if you’re not beside me, then get out of my way. I have a lot to do.”

Arden spends a lot of time alone in the country. People don’t spend enough time by themselves, she says.

“You should find a way to spend 15 to 20 hours alone each week,” she says. “That’s the way to learn how you think and feel. Take time to walk and read. To do creative work we need to spend time alone. Even on the TV show, the writers come together and collaborate, then everyone goes off and works by themselves. In order to create, you need to think about what is valuable in your life. To do this, it helps to be on your own. It helps you to make choices.”

Life is full of changes, both gradual and radical, she says. To keep working, you need to be adaptable. “My approach to business is always evolving. I wonder, what else can I do? I’m not afraid to fail. So I hit the ditch a lot. The experiences of life are not all like a beer commercial. We have to overcome obstacles. Life is a beautiful mess. It is not supposed to be easy.”

Near the end of our chat, Arden brings up the subject of death.

“I don’t think you just stop,” she says. “My mom used to say that our body is a spaceship and our soul is the pilot. We can’t travel fast in our body, which is the lowest form of what we are as human beings.”

For someone so in the public eye, she is skeptical of our hyperactive society. “Everyone is looking for something to fill themselves up,” she says. “We go nonstop, but we don’t realize it’s here all along. Most people need to be told what to do. They have to follow the teacher. They need guidelines. That is not a creative life.”

Change is the only constant. “Life is an avalanche. We are rolling down the mountain. I’m not the same person I was three or four years ago. Life is an extraordinary groove. You’re always adding to it.”.

Author: David Holt is associate publisher with Optimyz and parent brand Hum@n Media. An accomplished writer and editor he is also actively involved in his home community of Halifax, Nova Scotia.

4 ways to use nature to de-stress

The art of survival with Les Stroud

5 tips to get through your midday slump

Take the hurt out of high heels

The benefits of staying fit as we age