An inspiration to women 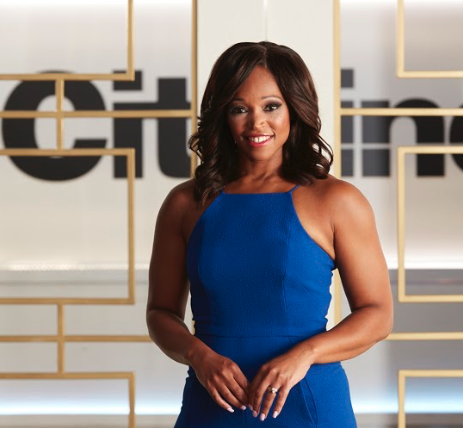 Cityline’s Tracy Moore likes to keep things real with her fans. From topics like struggling with body image to postpartum depression, her goal is to inspire and empower women.

Cityline host Tracy Moore peeled off her false lashes and took a cleansing wipe to her makeup, revealing a face full of freckles on live television. “You’re used to seeing me look like this every day on the show—but not today,” she told the audience. “Today we’re wiping away the smoke and mirrors.”

Moore, a hard news buff who’d covered breaking news, never imagined herself hosting a lifestyle program that covered topics like fashion, cooking and decor. She remembers when her news director told her Cityline was looking for a new host. “I couldn’t figure out why she even called me into her office,” Moore says. The tryouts for the show were a break for the new mom. Her mother took care of her son while she got to enjoy sitting in hair and makeup. “It was a nice escape.”

She landed the gig and the hosting job turned out to be a perfect fit. That was 10 years ago. Moore says she’s both host and a viewer of the program. “I’m also looking to the show for answers,” she says.

The show has helped her become a better communicator with her children, bumped up her cooking game, and helped her through personal struggles. The lessons she took from the show’s Fashion Fridays even helped her in launching her own inclusive clothing line that runs up to size 20.

Tackling topics that impact everyday women, Moore always keeps it real. Like admitting that she did have her eyebrows reshaped before she wiped the makeup off for one of the show’s popular segments.

Moore is all about authenticity. The host wants to show her audience the perfection they often see presented on television isn’t real. She wants them to know that being on TV doesn’t mean she doesn’t deal with her own insecurities.

Moore says when she looks in the mirror, she sees parts of her body she feels need to be fixed. “I’m a TV host, but I’m also a woman,” she says. Opening up about her own struggles helps viewers relate to her and deal with their own insecurities.

“All of a sudden they think, ‘Okay so she’s got all the hair help, all the makeup help; she’s got wardrobe help; she has a supportive husband who allows her to go the gym, and she’s still second guessing her cellulite,” she says. “So the woman at home who’s watching is suddenly thinking, ‘I feel very valid. I feel like some of my feelings are being heard. Maybe both me and Tracy need to take a moment out to think about all of the reasons we should not have a problem with our body.’”

Coming from the world of hard news, Moore had to make the shift from being completely objective to opening up on-air. She realized fans of the show wanted her to share her stories and opinions with them.

Being vulnerable wasn’t easy at first, but the more open she was about her marriage, parenting style, and struggles with her body, the better the audience response. Her audience wants to see reality. It’s something she delivers audience in the segment Cityline Real. She considers it her biggest contribution to Cityline.

Cityline Real is the segment that lead to her removing her makeup in front of the cameras and a live cheering audience. She hopes the candid segment will breakdown any barriers between her and the show’s fanbase.

She and a panel of women discuss the topics and share their own perspectives and stories on the show. Fans write in on topics like disastrous haircuts and their favourite weird food combinations. But this portion of the show also tackles bigger topics like infertility, body image, and plastic surgery. “We want people to understand they aren’t alone and there’s no one answer,” she says.

A show for women by women

It isn’t just the content of Cityline that’s empowering women. The show has a female workforce behind the scenes that’s calling the shots. Cityline is a mix of Moore’s personality, passions and interests as well as of those who help her run the show. “It’s a women-run show for women,” she says.

Moore’s plan for the program is to feature stories that celebrate women and continue discussing topics everyday women face. The next topic the host is interested in is social media.

Her own social media pages are a place for positive discussion. Moore says even the fans who disagree with something she says are able to debate respectfully online. But she says her online world has been invaded by a few trolls.

Moore normally bypasses negative comments, but says several commenters critiquing her body that had her clapping back. In one instance she shared a photo that celebrated her body after one commenter said she was “getting too muscular.” Moore wants her social media platforms to be a body-positive place.

Always striving to be authentic, Moore hasn’t shied away from speaking publicly about what she says has been her biggest struggle in life. After giving birth to her first child in 2008, Moore dipped into a serious bout of postpartum depression.

After a natural birth with no medication, which she says she didn’t try the second time around, her physical recovery was quick, but the emotional recovery was much slower. The first six weeks were the darkest. Moore came home from the hospital tired and unable to connect with her son. A constant stream of tears were flowing, whether she was in the shower or at the gym.

Moore leaned on those around her, especially her husband. She recalls how he took over doing one of the night feedings so she could get more sleep and connected her with a friend who told her it’s normal for new moms to feel awful. Eventually, motherhood began to feel more manageable. “By the time [my son] started to smile, I could see the light at the end of the tunnel.”

Although she had the support of family and friends, it took some work of her own to improve her mental state. To start feeling like herself again, Moore got moving and took her son along for the ride.

‘The cheapest most accessible drug on the market’

To improve her mental state, Moore began fitting workouts into her day when she got the “ok” from her midwives. She didn’t have a jogging stroller but that didn’t stop her from running in the park with her son. Her baby even acted as a weight while Moore did lunges and squats. A dedicated gym rat, Moore was learning more about at-home workouts when she connected with another new mom. The two women did bear crawls, burpees and push-ups as they alternated soothing their crying babies.

Keeping active is something Moore recommends to other mothers who are battling postpartum depression. “It doesn’t have to be anything complicated, just move,” she says.  “It’s the cheapest most accessible drug on the market.”

Exercise was key to Moore’s emotional recovery. She says it’s the reason she makes sure to still sweat once a day. A morning person, Moore gets up before six every day and continues to switch up her activity. Some days she takes her dog for a run, and others she does a treadmill workout in her basement. Sometimes Moore works out with her girlfriends; they use weights to train whatever part of their body doesn’t hurt that day. She also works out twice a week with a personal trainer.

Despite her busy schedule, she says you have to squeeze in a workout whenever you can. She believes that the times your life is most chaotic is when you need exercise the most. A workout always leaves the busy mom of two feeling refreshed. “There’s never been a time I’ve worked out and said ‘I wish I didn’t do that,’” she says. “It always delivers.”

Keeping up with a full-time job and her children, she doesn’t always have the time for a lengthy sweat session at the gym. Sometimes, Moore runs sprints for 15 minutes and that’s it for the day. “You don’t always have to feel like you need to work out for an hour.”

‘My words will carry’

Moore never expected that a lifestyle program would become her platform. But it’s an opportunity she takes seriously. As she stands in front of the camera, Moore knows young women of colour are watching her. “They are saying to themselves, ‘I haven’t seen a lot of this. Maybe I can do this,’” she says. Moore sees them come to work on her show as interns. “That gives me so much hope.”

She knows there aren’t many women of colour hosting a program that’s broadcasted across the country, and since its recent syndication deal across the United States as well. “I take it as a responsibility,” Moore says. “My words will carry.”

What Moore says both on and off camera resonates with fans who know she’s presenting her authentic self for them to see each day. Whether she’s breaking down body image issues on Cityline Real or letting the world know she’s a strict mom, it’s clear Moore was able to break the hard news rules that were ingrained in her to let her fans get to know the real her. She is no longer afraid to be fully herself on camera, even if that means going on without her fake lashes.

More Inspiration: You might want to also check out this article on surviving postpartum depression.

Author: Page Woodard is a Canadian freelance journalist and writer and frequently writes for Optimyz Magazine.

Surviving social media during the holidays

Be your own cheerleader

Plan ahead to navigate 2020 & feel your best

Girls on the run