There is no question, it’s been a tough couple of years. COVID-19 brought a lot of uncertainty, impacted our physical health and mental well-being and eroded our social connections. In the meantime, Canadians became more sedentary. 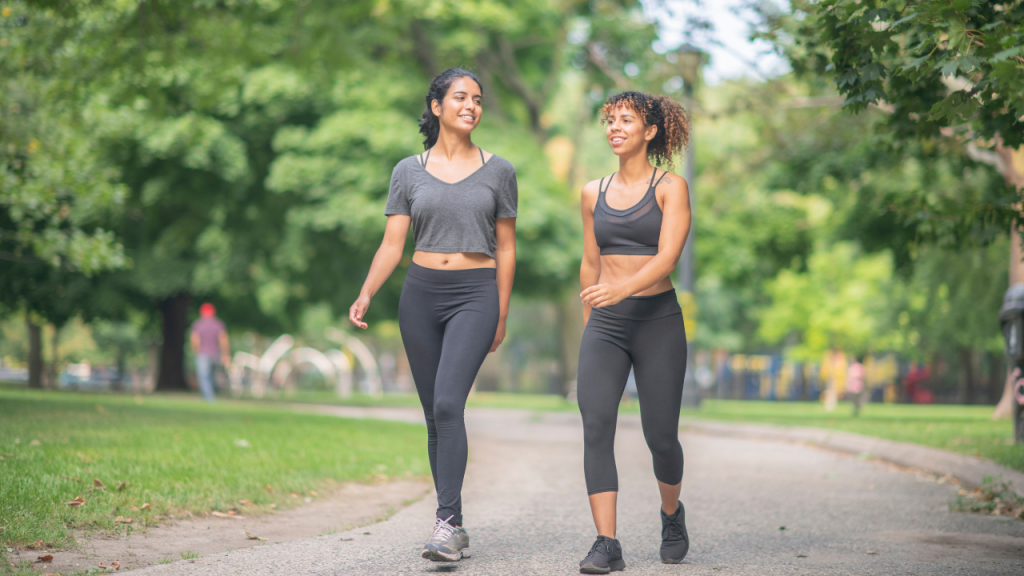 According to Greg Wells, Ph.D., a performance physiologist and a senior associate at SickKids Hospital in Toronto, “If you look at humans from an evolutionary perspective, we are designed to walk. And when we walk long distances, we get healthier. Our muscles and bones get stronger. Our spines function better, blood flows to our brain and bodies, and the benefits are profound. We also know that the risk of 13 different types of cancer decreases when you walk for as little as 15 minutes a day.”

If you’ve ever doubted the power of taking a walk, consider how you feel when you get outdoors in nature. Walking stimulates creativity, cognition, and problem-solving. “Most importantly, there are the benefits for mental health, reduced depression and anxiety,” points out Wells. “So, it spans the spectrum of what humans need — physical and mental health, and mental performance. And it’s something that’s totally accessible.”

Andrew Huberman, Ph.D., an American neuroscientist and associate professor in the Department of Neurobiology at the Stanford University School of Medicine, recently spoke on the Huberman Lab and Finding Mastery podcast about the importance of forwarding ambulation – walking.

“There’s a phenomenon whereby visual images pass by us on our eyes when we generate our own forward motion, so-called optic flow. Getting into a mode of forwarding ambulation and especially experiencing visual flow has a powerful effect on the nervous system. Essentially it quiets or reduces the amount of neural activity in this brain structure called the amygdala, which generates feelings of fear, threat and anxiety. So, the actual movement of objects past us as we walk quiets some of the circuits responsible for stress,” Huberman said.

So, when you move through space, whether walking, running, or driving, you’re in what’s called optic flow. Huberman says, “Things are moving past your retina at varying speeds, depending on how fast you’re moving, but your brain knows how fast you’re moving. It cancels out the movement to say, okay, these objects aren’t moving past me. I’m moving past them. All of this boils down to a set of circuits in the brain and body that make it so that when we’re moving through space, it has this property of relaxing us.”

Did you know that 85% of Canadians don’t get enough physical activity to prevent chronic disease? If we went out for a 10-minute walk a day, we would radically overhaul our need for our health care system and reduce our instance of many different chronic diseases.

Along with getting your dose of Vitamin D from the sun and the fresh air, you’re also inhaling phytoncides. “These are little molecules that plants release, which stimulates our immune systems to be stronger and more effective. Phytoncides have antibacterial and antiviral qualities, which help plants fight disease. Our bodies respond by increasing the activity of a type of white blood cell called natural killer cells or NK, which help fight off invaders inside our bodies,” says Wells.

And while you’re out for that walk, without your electronic gadgets, consider how just being in and around nature can yield positive health benefits. We can thank Yoshifumi Miyazaki, who for three decades has been researching Shinrin-yoku, the Japanese practice of forest bathing, which is taking a slow walk in nature while unlocking your senses and letting them be your guide to mindfulness.

Yes, walking is and should be a pleasurable activity. But who hasn’t been a victim of step-counting shame? What’s behind those 10,000 steps?

Just around the time of the 1964 Olympics in Tokyo, there was an increased focus on fitness and the well-being of the Japanese population. A Japanese company called Yamasa Clock created a personal fitness step counter called the Manpo-Kei, which literally means 10,000 steps meter. “But it was not based on science,” says Catrine Tudor-Locke, Ph.D., Dean of the College of Health and Human Services and researcher at UNC Charlotte, “but it was a great business strategy that stuck, and the rest is history. Ten thousand steps later and still going strong.”

It’s not to say 10,000 steps is not a worthwhile goal to achieve and or exceed – but Tudor-Locke points out it started as just a great marketing tagline that has been the rallying cry for walkers and fitness enthusiasts alike.

According to the 2019 ParticipACTION Adult Report Card, as few as 16% of Canadian adults (aged 18 to 79) achieve the national guidelines of 150 minutes of moderate-to-vigorous activity per week.

But how does your step count relate to the 150 minutes of the moderate-to-vigorous intensity of aerobic physical activity per week recommended by public health guidelines?

Tudor-Locke says if you look at people who hit the public health guidelines of 150 minutes, they’re averaging about 7,500 – 8,000 steps per day. So, if you’ve been counting 10,000 steps as your goal – and the guideline indicates 150 minutes which averages about 7,500 – 8,000 steps, don’t feel obliged to reduce your step count. After all, the 10,000 steps were just an arbitrary number and not scientifically determined.  As for any drawbacks to increasing your step count, Tudor-Locke said we don’t know a number where it’s detrimental. We know that more physical activity will always reap more rewards. Besides, your body does a pretty good job of helping you self-regulate how you feel.

“The highest published values we have are for Amish men and women living around Southwestern Ontario. The men average about 18,000 steps per day, and the women are about 14,500 steps per day, with no overuse injuries. And that’s every day, so it gives you a snapshot of what is possible.”

What’s important is changing behaviour. So, if counting steps provide that motivational push to get you out the door – then track your steps. But you might also want to consider your cadence (steps/min) or how fast you’re actually walking.

How Fast is Fast Enough?

As an expert in walking behaviour, Tudor-Locke said, “Although the total daily accounting of accumulated steps is a volume indicator of physical activity, there is no account for the variable intensities of effort associated with execution. In other words, what does moderate and vigorous-intensity look like?”  According to Tudor-Locke’s research, she said the threshold is 100 steps per minute for moderate and 130 for vigorous intensity. And that works across the adult lifespan of 21 to 85 years of age.

“So, if your step count is in the higher range over 10,000 steps – you’re most likely hitting moderate to vigorous intensity. In other words, you must be doing some purposeful walking to reach those numbers.”

Wells has a very simple message, “Don’t worry about how many steps you’re walking, just walk more – the steps will happen. So, if you’re currently only getting 500 steps a day, I don’t want you to try to get to 10,000 because that won’t work for you. Try for 750 – slow and steady. Remember, it’s not a race.”

So, what are you waiting for? With so many benefits waiting for you, get those shoes on and go for a walk. Today is the first day to hit your reboot button.

Marylene Vestergom is a Toronto freelance writer who has reported at four winter Olympic Games for CBC and CTV. Her work has appeared in the Toronto Star, Globe and Mail and other leading media outlets. Her focus includes health, fitness and lifestyle trends.