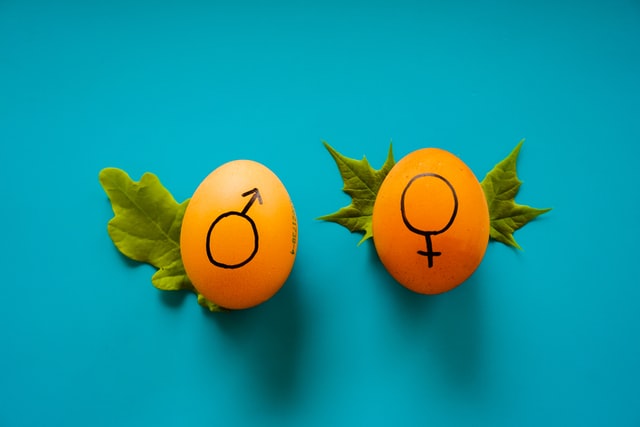 Gender is not always black and white. Genetics, medical conditions and other factors influence our sexual identity.

Males and females are better considered along a male-female continuum rather than as opposite ends of a complete dichotomy. So argued my PhD supervisor’s supervisor, Dr. John Pinel from UBC. There is substantial biological reasoning for this viewpoint.

First, consider genetics. We categorize sex according to the chromosomes X and Y. As their 46th chromosome males have an X and a Y and females have two Xs. Mothers pass on their X chromosomes to offspring, because they only have Xs, whereas fathers pass on both their X and Y. When they combine during fertilization, they give
rise to either a male (XY) or female (XX).

During normal development, the body produces the sex-specific hormones testosterone and estrogen and they circulate through the body to give rise to what we typically think of as males and females.

At face value, this is simple. However, there are conditions that cause a discrepancy of among gender as determined by genetics, the individual’s response to sex hormones, and physical sex-specific characteristics like genitals and body type. These can lead to medical conditions called “intersex.”

Here’s one example of intersex. A person has XX chromosomes and ovaries, but developed male external genitals. This results when a female fetus receives too much exposure to the masculinizing sex-hormone testosterone during critical periods in the womb. The labia (lips of the female external genitalia) fuse, forming a scrotum and the clitoris enlarges to form a penis.

Both of these tissues can develop in either direction, and do so in response to circulating sex hormones (the default is female, by the way). The most common cause of this is Congenital Adrenal Hyperplasia, a condition in which the individual lacks the specific enzyme and effectively increases androgen (a hormone group that includes testosterone).

A similar condition, Aromatase Deficiency, happens at puberty. Aromatase is an enzyme that converts androgens to estrogens. This condition goes unnoticed until XX girls hit puberty and respond to the excess of testosterone by beginning to develop into teenage boys!

Similarly, there are individuals who look like women but are genetically XY male. This is called Androgen Insensitivity Syndrome. We tend to hear about these women around the time of the Olympics when questions arise about their exceptional performance. In this condition, the individual is biologi- cally unable to respond to androgens and therefore develops as female (the default, remember). This condition can go unnoticed by women until they attempt to have children and realize they have male, not female, internal organs.

These examples raise the question: What constitutes men and women? Is it genetics? Physical characteristics? Gender identification? And I didn’t even touch on individuals who are XYY or XO genetically!

I find this topic interesting for several reasons, particularly as a reminder that categories, although helpful in many circumstances, can limit our understanding. I also hope, in highlighting this science, to pro- mote tolerance for those who don’t fit into conventional categories, which can include varying sexual orientations.

In prenatal development, there are sev- eral brain areas that correspond to being male or female that develop later compared than genitals. This suggests a potential a mechanism by which gender and physical characteristics can be misaligned, as in transsexual individuals who undergo sex-reassignment surgery. There is significant evidence that these areas correspond to the gender “felt,” not “born as” (see research by Dr. DF Swaab for studies in this area).

More Insights: Check out this insightful article on how to deal with body shame.

Author: Amanda Wintink has a PhD in neuroscience and psychology, and is based in Toronto. She occasionally writes for Optimyz.

Fuelling your body to exercise

Stomach massages: Why you should be getting them

How swimming boosts your brain

4 easy ways to hack your stress