When most of us think of sex, we think of the physical part first. But sexual pleasure can be drawn from many sources and experiences. 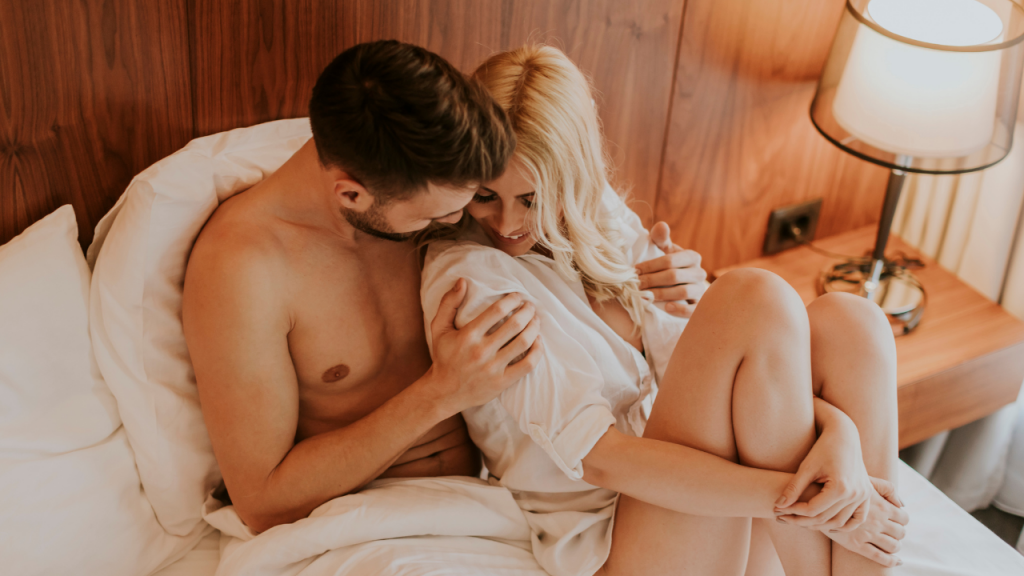 Physical touch feels good. We all know that. But did you know it is also essential to human growth and survival? Some of the potential benefits of affection include lower blood pressure, an increase in oxytocin, a reduction in stress hormones, pain alleviation, heightened immunity, and lower levels of anxiety.

Physical touch activates regions of the brain associated with thought and emotion. It lowers both heart rate and blood pressure and increases levels of oxytocin, the feel-good chemical associated with bonding.
And the benefits of physical touch flow in both directions—to the giver and receiver. A study found that when women touch their partners as a sign of support, there is more activity in their own ventral striatum, a region associated with reward processing.

As you experiment with the physical components of seduction, you don’t need to think about why it affects you, but rather how it affects you and your lover(s). Different types of touch may be suited to different lovers, different areas of the body, and also different moments in time. The way a partner wants to be touched on Monday night after a long day might be different than how they want to be touched on a lazy Sunday morning.

Erogenous zones are areas of the body associated with sexual excitement and arousal. Of course, the whole body represents one big potential erogenous zone, but there are specific spots that tend to be more sensitive to physical seduction and touch. They vary from person to person, as no two bodies are alike. While you may love a gentle tickle against the back of your knees, your best friend might find it irritating or uncomfortable. This, of course, brings us back to the necessity of talking to the person(s) with whom you are having sex.

We’ve said it before and we’ll say it again: if you want to have sex, you have to talk about the sex.
When it comes to erogenous zones, you might find that your most sensitive spots vary from day to day and that your mood, health, partner, and even positioning play a role in which areas are most responsive to erotic touch. For example, Jenni, who identifies as kinky, has a special and tenuous relationship with the nape of her neck:
I can have an orgasm from having my neck and back touched, kissed, stroked, and flogged. But at the same time, I will curl up and recoil if you kiss it at the wrong time or in the wrong way. Sometimes it’s actually about the partner and not about me.

So I would say the nape of my neck is both an erogenous zone and a no-go zone, which makes my body a little complicated. This is why before every scene—regardless of whether it’s a regular partner or someone new—I have to be very clear about what I’m in the mood for. And during the scene, I give specific directions. Now. Not now. Lower. Higher. I’m very specific. I’ll even say I want you to increase the intensity by 10%. It doesn’t sound sexy when I say it now, but it is hot at the moment, because not only am I in control, but I’m utilizing a part of my body in a way that most people know nothing about. Can you imagine having an orgasm simply from an ice cube rubbing against your neck? It’s powerful stuff, but it really does require that I communicate excessively, which is worth it to me.

With the right touch (or touch avoidance), any area of the body can ache with desire and swell with arousal. Consider seducing your partner with a gentle, but purposeful touch of the following potential erogenous zones:
Suprasternal notch: This area, located at the center of the neck just above the collarbone, is highly sensitive to gentle touch, and you will not want to apply much pressure, as it overlies the airway. You can pique your partner’s interest by simply tracing your fingertips around this notch with a featherlight touch. Alternatively, kiss their collarbone with your lips and tongue and then breathe gentle, warm air over this indentation to arouse their interest. The more you prime an area for pleasure, the more likely they’ll be to experience pleasurable sensations in the region during heightened arousal and orgasm.
The sides of the chest: The stretch of skin beneath the underarms can be highly responsive to pressure, temperature, texture, and other forms of touch. Use the backs of your hands to trace your fingernails from under their arms to their hips, or play with a leather or feather prop to heighten awareness of this area while you’re working your way down and warming them up for oral.
Philtrum: The entire face can be highly sensitive to erotic touch, and if you’ve ever experienced an orgasm during which your face tingles, you likely consider your lips, cheeks, chin, forehead, and eyelids highly erogenous. The word philtrum is derived from the Latin for a love potion, and it refers to the sensitive groove right at the center above the upper lip. Try gently brushing up against it with the tip of your nose while you snuggle, or running your lips sensually along with it while you kiss.
Belly button: The belly button is not only associated with sexuality for its close proximity to the genitals, but it has a history of primal and erotic associations. It is the giver of life and is rich in nerve endings. It has been painted as both visually and tactilely erotic, and its exposure has been banned as indecent in dress codes as a testament to its taboo sexual associations.

If you play around the edges or stimulate the shallow part of its groove, you may experience pleasurable sensations in the surrounding region across the fibres that lead to your spinal cord, which also relay information from your bladder and urethra to your brain. This is why some folks report feeling tingly sensations in their genitals via stimulation of the belly button and others find that orgasmic sensations are intensified via direct contact with the belly button.

This is a piece from the book The Ultimate Guide to Seduction and Foreplay: Techniques and Strategies for Mind-Blowing Sex (Ultimate Guide Series) by Jessica O’Reilly  (Author), Marla Renee Stewart (Author)

If you enjoyed this article here’s another article from Dr. Jess on Emotional Seduction for Better Sex.